John developed an interest in blacksmithing as a child, purchasing his first anvil at the age of twelve.  As he grew to manhood, he continued to work with metals – both hot and cold – as time and the demands of career and family permitted.  In the early years he cold worked tin with his Father while participating in Revolutionary War reenactments.  Later he practiced the arts of chainmaille & armor as a member of the SCA and fabricated custom bodywork for automobile restorations with his son.  Today John has combined his mechanical training, artistic skills and love of historical craftsmanship to create Sallee Creek Forge, creating works in iron & steel using both coal and propane forges. 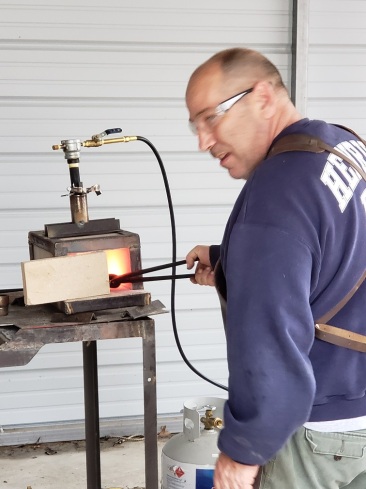 A variety of items are available from Sallee Creek Forge, from the utilitarian pieces like these hooks (used for bundling and dragged brush and wood) to custom order pieces.  John will also craft maille garments by custom order.   He also enjoys making historic meal kits and custom blades.

Under the Virginia Sun ...or A Year in a Powhatan Vineyard